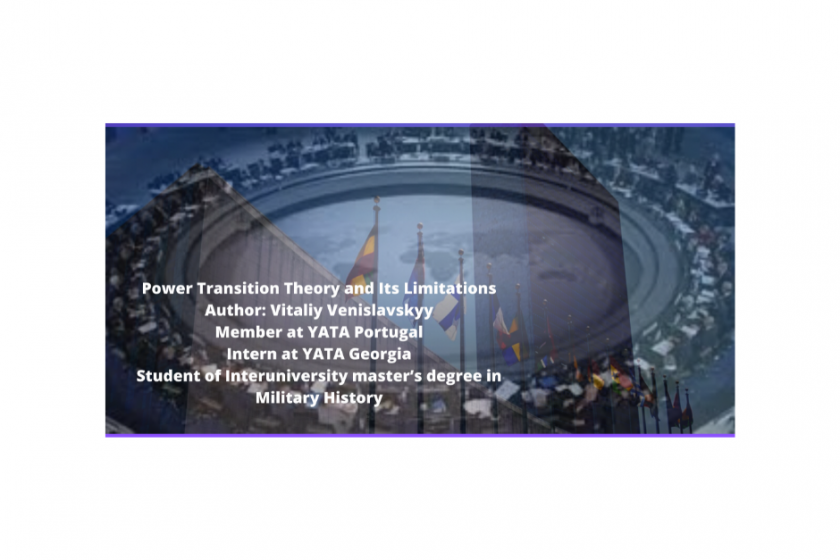 Power Transition Theory and Its Limitations

The International Order built and led, for almost 70 years, by the United States is in crisis. We can see that in the Middle East, East Asia, Eastern Europe and even in the US and EU (internally). Things are changing and moving towards a global transition, and the fear of the order breaking down continue to rise. Global International agreements and institutions appear to be weakening, and this set of circumstances opens opportunities for non-western states to rise – notably, China and Russia.

This political environment gives a lot of space for geopolitical and even philosophical speculation around the ways that the rising states want to reshape the order. In other words, are they “stakeholders”, or are they “revisionist” states?[1]

In this article, I will try to develop an idea in which the real shift is happening in the US Hegemonic position, however, the Liberal International Order will continue to exist, and the liberal agenda will remain on the table for the future. Also, given this change in the management core of the order, what should be the role for NATO and how can the Alliance be reshaped and adapted to new challenges, and figure out new opportunities through this ball game.

Power Transition Theory and its limitations

Regarding a wide agreement that the world is witnessing a global power transition, there’s the main way of looking at this through the lens of Realism and its subsequent idea of Power Transition Theory, which states that:

« Orders are created by a powerful state, and when that state declines and power diffuses, international order weakens or breaks apart. »[2]

Although the fact that International Order weakens or breaks, we must look at that as a long-term process, with the dynamics of power showing the accountability of elements of a transition of power. Those elements, as stated by Hebron[3] incorporated in the Power Transition Theory concepts like nuclear deterrence, alliances, arms race but, above all of them, a speech direct towards the guarantee of a democratic, long-standing peace, and, finally, the expanding subsystems of the developing through which regional powers tend to go global. This way, Power Transition Theory enhances the relationship between the structural position of leading states with the international system and the subsequent involvement in conflicts. This way, Hebron et al.[4] create aspects of Constructivism, inside a purely Realistic Theory.

Related to an analytical study, provided by Hebron et al., it is important to understand that state power, and the way each state produces and projects it is a combination of two main components: (1) changes in relative capabilities and (2) critical points of divergence. In other words, the theory states that states evolve in a generalized and cyclical pattern of ascent, maturation, and descent. This pattern relies mainly on the differing rates of influence over international economic and political development.[5]

Through this vision, one may argue, as soon as one state gains power in comparison with others, its capacity to exercise leadership expands, and as it falls behind, its ability to influence diminishes.[6] Practically speaking, if a state loses power, all the order would automatically be weakened and threatened by another growing power.

Based on this relation, there is a set of arguments, that I will present further in this article, by which this point of view would not fit completely on what is happening in this set of political power games.

Firstly, some might argue that the United States still possess infrastructural sources to provide and deliver its hegemonic power all over the world. We can look at it, by two means: the military one, in which we see that the US is still the highest-ranked army in the world, possessing the available capability to intervene whatever it’s needed, and the political ones, where far-flung security alliances, market relations, liberal democratic solidarity and deeply rooted geopolitical alignments are still in work.[7] For example, the newly formed AUKUS alignment, between the US, Australia and Great Britain is set with the clear objective to tackle China’s pretensions towards the Chinese South Sea. This alliance, although has given some political friction between France and the UK, proved that Australia clearly sees a better outcome to cooperate with the US on matters of defence, and so Washington still possesses those above-mentioned sources of hegemonic power.

Secondly, against all the Realist ideas, a well-rooted liberal international order does not require hegemonic dominance to persist. International Order is not an artefact of concentration of power, but, contrarily, is a highly complex set of international laws and institutions that are way stronger than the rise and fall dynamics of powers. There are two main aspects to sustain this idea: International Order is very complex, it is made of a multi-layered, multifaceted set of institutions, where political imposed directly by one is impossible, it’s not possible to either join or to resist, there are deep rules and norms of sovereignty that everyone respects. Also, although there are claims against some of the rules, those claims are so diverse that it’s quite impossible to create put everyone claiming their interests in one pot.[8]

Thus, presenting these arguments is showing a way of looking deeper insight into that the International Order cannot be completely understood through power transition dynamics. Rising states, at the end of the day, do not confront a single order, but rather a huge buffet of options and choices, enforced by laws and institutions[9]

As John Ikenberry (2018) may have argued, rather than a cyclical dynamic of rising and fall, change in the existing order is captured by terms such as «continuity, evolution, adaptation and negotiation» [10]

Finally, and in pursuit of a historical perspective over the current International Order, one might argue that it was created by the US, and it will remain as such until the US power completely declines. However, we can deepen this perspective and conclude that nowadays Order was created by two main long-term internationalistic projects.[11]

On the one hand, we have the Westphalia Peace Treaties (1648), when the Thirty Years War ended. After almost 25 years of interrupt fighting, all the European powers in set decided that there was a need to end this unending bloodshed, and so, through the sum up of 3 agreements (Peace of Munster,  January 1648; Treaty of Munster and Treaty of Osnabruck, October 1648) Peace of Westphalia has been born, with the major intent of a friendly and sincere peace where there was not the empire, the dynasty nor the religious confession were regarded as the building block of the European Power (as they were strongly shattered during a conflict where alliances shifts were a reality practised by each of the parties), but the State. The conception of State Sovereignty was possible due to all the general exhaustion and cynicism that allowed all the participants to transform practical means of ending war into general concepts of a new order, that would expand into a worldwide concept.[12]

This Peace gave the European Political Order a new centre of political thinking, where principles such as sovereignty, territorial integrity and non-intervention were the founding establishment of legitimate rule.[13] This thinking was purely European, in the beginning, however, it laid the basis for further decolonization, where national sovereignty was the main force of worldwide independence movements, as well as globalized Westphalia.[14]

On the other, this global Westphalia provided the foundations for the liberal international project, where diversity of visions, a complex agenda created open markets, multilateral institutions, cooperative security, shared sovereignty, and the primacy of the rule of law.[15]

Both projects, we may state, were founded on ideas that turned universal in their normative and political scope. As a result of that, we can look at the United Nations and the R2P international norm, which gives the international community the right and obligation to intervene in societies to protect their lives. And rising powers do operate in this framework.[16]

Although NATO is surely the most successful military alliance of the last 70 years, and institutionally is the strongest one, it is now living through a new establishment in world politics, that created and even reinforced an already existing deadlock in the politics of the Alliance. Through the analysis of NATO’s ideological framework, it is possible to understand how the Alliance has been adapting itself to the continuity of Change in International Relations, and this way, present the new patterns to follow and the opportunities to find in the future headset of world politics.

As da Mota (2018) argues, NATO has been formed through a process of a natural evolution of the Alliances object of security – Europe and the EU. Deeply inspired by the Braudelian notion of “unconscious history”, NATO’s unfolding comes as a natural process.

Within its existence, the Atlantic Alliance has gone across two distinct ideological eras and each one of them with different extents of influence on the geopolitical division of the world.[17]

Firstly, NATO was created as a collective and defensive organization, that sought to defend Western Europe from Soviet threats. In other words, NATO was promoting the safeguard, not the individual, but the idea of a human civilization that lived under threat, basically defending values, such as liberty and common heritage.[18]

Secondly, in the Post-Cold War period, NATO underwent a process of adaptation to a complete world trend, where it moved from collective defence to a global security path. Conceptually, this trend was associated with the notions of “human security” and “humanitarianism”, and, inside NATO’s institutional framework was born during the missions in Bosnia. Individualisation of Security created a cosmopolitan consciousness, and NATO, consequently, went global.[19]

Politically, NATO has stood for this year because of a so-called “Transatlantic Bargain”, as argued by Asle Toje,[20]which is the political understanding that existed between Europe and the United States, which was the founding basis for NATO existence.

However, as Toje (2009) may state, this understanding has been undermined by some developments in NATO’s core political framework.

There is a two-way link that provides the understanding that Europe presents diminished importance in the US Foreign Policy. It comes as such because the new generation of US leaders that have no so special affinity for Europe’s affairs, firstly because a common geopolitical purpose is absent,[21] as we may see it in the above mentioned AUKUS Alliance, as the fundamental centrepiece of US geopolitical power.

Secondly, European Foreign Policy Integration seems to have failed to keep up with a bilateral US-EU relationship. Both scholars and politicians have continued to struggle to come to terms with the multi-purpose, multi-dimensional, supranational, and intergovernmental character of the European Union. EU is incomplete, thus potentially a very formidable strategic actor.[22]

To conclude this essay, and by providing a theoretical point of view on how the International Order does was created and could be maintained, through the maintenance of the current liberal values in the World Order, how NATO has been formed and adapted to major geopolitical frameworks in the world and the central position of the relations between the United States and the European Union, we may state that EU proves to be a centrepiece in NATO’s future.

By saying that, the European Union, and the way it deals with its existing challenges on how to reinforce and continue with its political integration, will dictate the future of NATO and the transatlantic relations.